Now that it's settled and I've decided to avoid washes and inks and just go with the three-color method from here on out, I was eager to prime some more figures and get to it.

It mixed up easily but stunk to high heaven. I wore a mask and opened the sliding glass door, but I still got tremendous headache that lasted about 24 hours. At first the enamel paint went on too thickly. So I cut it with the Gamsol thinner I had. For some reason the thinned paint dried shiny!

Oh, well. Into the paint stripper. Sadly, my old stripper of choice Dawn Power Dissolver has been discontinued. I ended up buying some industrial strength Simple Green. Soon they are going to know me on a first name basis down at the local hardware store.

After that fail, I decided to go back to spray primer so I bought another can of Duplicolor primer. My first go with it I had difficulty getting it to spray into the harder to reach areas. I had done the obvious thing and placed my figures on a cardboard box outside to spray them. Upon further research I found this interesting video tutorial on priming. So I decided to give it a go - with a mask, unlike that yahoo.

I bought a 36" piece of 5/8" square poplar and cut it into 12" sections. Now I can blue-tac my figures onto the end and spray away at them from almost any odd angle. 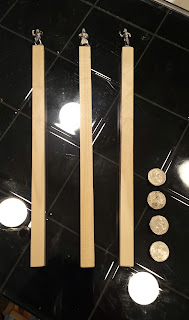 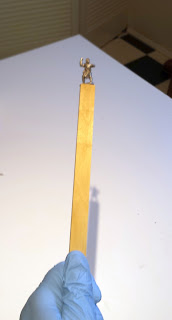 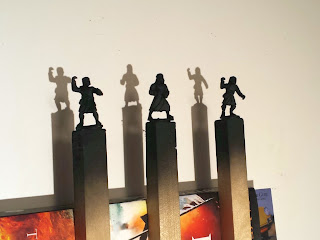 I've made one modification since I took these photos. The blue-tac didn't stick so well to the porous, rough-cut wood at the ends of the sticks. So I've nailed on some polycarbonate furniture disks to give the blue-tac something to stick to. Last thing I need is a freshly primed figure taking a dive into the dirt...
Posted by wiatrog at 11:44 PM