I've made some progress with the zenithal painting of my next three wee Scots.

I thought I'd start with the flesh. One of the videos I'd watched on painting over zenithal highlights (from Vince Venturelli's excellent "Hobby Cheating" video series) mentioned that it doesn't work well for skin, so you're better off putting down two light coats of flesh tone over the highlight: 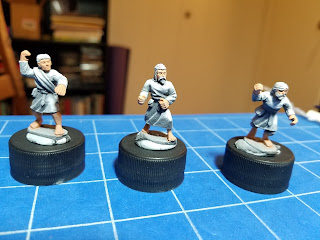 I also worked up some of the "volumes" of the tunics with a white glaze over the zenithal highlight. This seems a bit fiddly to me (isn't this what the zenithal highlight should be accomplishing?), but the same YouTuber pointed out that all the time you put into "value sketching" at this stage will pay off at the end.

Getting the consistency of the glazes correct was a bit of a challenge and will take some practice. I'm sure it was only made worse by the fact that my paints have been sitting unused for years. So I followed the advice of another YouTuber and added a 5/16" ball bearing to each dropper bottle: 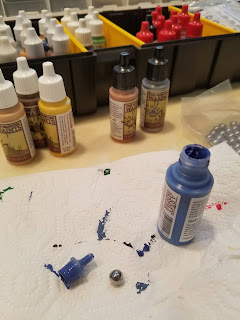 A messy proposition, but I feel like the paints are much easier to mix now.

After watching another one of the "Hobby Cheating" video series, I decided I might want to give dry brushing the hair a go. This means putting the flesh on hold for now (since dry brushing can be a bit of a messy proposition as well!). Here are the figs after an initial glaze or two of various Army Painter paints diluted with Vallejo Thinner Medium on their heads: 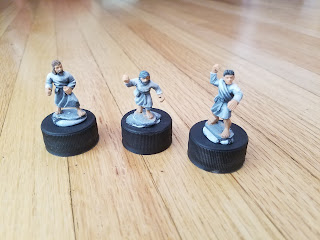 As usual - very slow progress as I muck about, but for me - that's mostly what this hobby is all about!

Posted by wiatrog at 3:39 PM No comments:

Long time no post! Long time no hobby, actually. With the COVIDs, I've been on furlough and have been inspired by several painter's on YouTube. So I figured, might as well break out the brushes again!

Up to this point, I've tried three different techniques for my wee Scotsmen:


Most of the video's I've seen on YouTube lately have started from a zenithal prime and then used inks, glazes, or "contrasts" paints to build up from there.

Here is my first attempt at zenithal priming with auto store rattle cans (that's what I had): 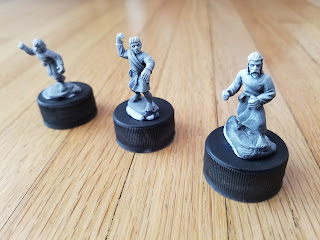 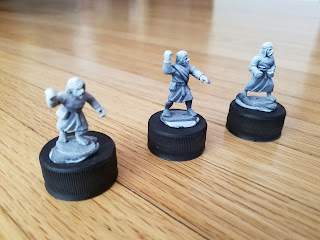 I see what people mean about the auto primer nozzles: the fan shape makes the spray tough to control. I had to hold the can sideways for the zenithal white coat.

Posted by wiatrog at 1:35 PM No comments: