Looks like I don't know my own strength. I went to remove a figure who'd been blu-tacked onto a bottle cap for a while and lo and behold he snapped right off of his base leaving his foot behind!

Luckily my lord and master, Kevin Dallimore covers drilling and pinning in one his books so I was well up to the task of repairing him. My wife has more hobbies than I do, and one of them is jewelry making. Luckily she had a tiny push drill and some wire for me to use. After I had super glued the pin in place and allowed it to dry I pasted over the gap with some GW liquid green stuff. Which is not so liquid-y, by the way (unless I've gotten an old bottle).

Sadly I did not snap pics of the whole process, but I'm sure its documented out there somewhere. Here are some after pics of the levy ready to be sanded. 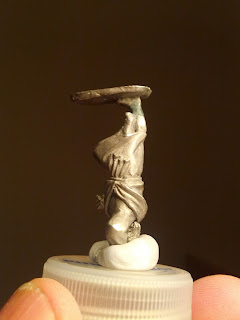 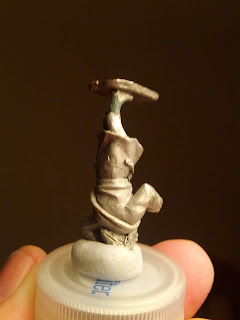 Also, a quick reminder that James' blogger's conference is coming up soon. Details below by clicking the image below:

Email ThisBlogThis!Share to TwitterShare to FacebookShare to Pinterest
Labels: Notes

After some discussion that followed a previous post, I decided to take some snaps of the dipped and highlighted levies at a distance.

With all the extra time devoted to him, our three color method levy seems to have gotten a big head. He rather fancies himself a hearthguard now and has taken on all three of the plebeian dipped levies! 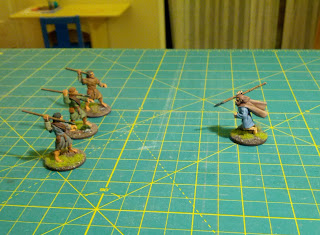 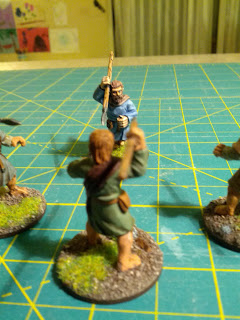 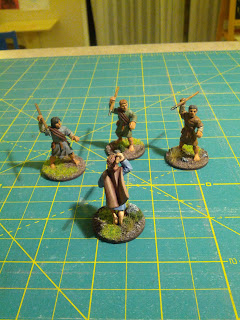 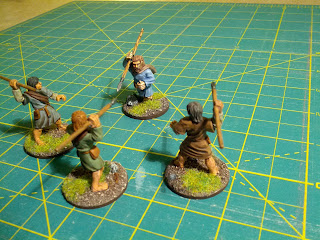 As you can see, they all look pretty good at this distance. Up close I really can't stand the dirty look of the dipped figures though. So unless an actual game of SAGA appears on the horizon, I'll be slowly plugging along with the three color method.

Email ThisBlogThis!Share to TwitterShare to FacebookShare to Pinterest
Labels: Scots

I finally broke down and ordered one of Sally 4th's Warchests. The shipping to the States was a turn-off, but since they used one of my ideas I kind of felt like I had to get one.  It arrived with no instructions. They haven't put those together yet according to the kind bloke that answered my emails. He was very helpful though and answered all my daft questions as I'd never messed about with MDF before. 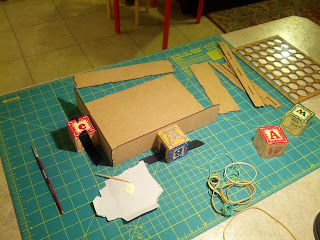 I'd seen Legos used to square up miniature construction projects in an issue of Wargames Illustrated. I couldn't seem to track down any Legos, so I used some of my daughter's alphabet blocks instead. 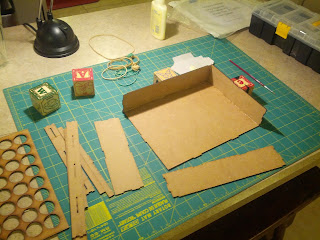 The guy from Sally 4th recommended rubber bands to hold things together while the glue set. I only had one big enough to round the whole thing though. 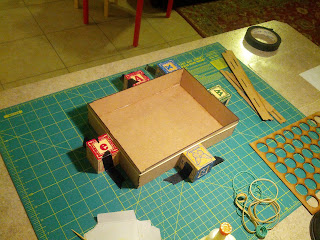 Here's the finished storage box with the 25mm insert and the Perspex lid. The latter being my idea.  =] 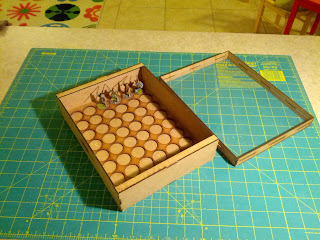 Here is my numerically unimpressive levy force going for a ride. I gave the box a bit of a tumble and shake to see how well the insert did at keeping the figures standing upright. 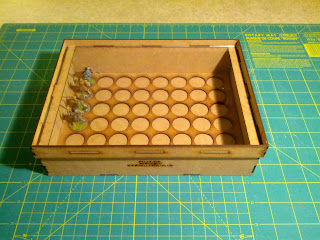 For the most part it did a fine job. It won't take a serious jostling, but as long as one is relatively careful I think it will do just fine. One of the figures repeatedly had issues though. The levy laboriously painted has a cape that is rather large and windblown. I think this raises his center of gravity too much and makes him prone to falling over.

I ordered the 2mm thick insert and in hindsight I probably should have gotten the 3mm one.  I'm tempted to order another 2mm and plop it on top of the current one. The shipping one one insert would be ludicrous though. I may see what I can jury rig on my own. There is that 3D printer at my new job...

Email ThisBlogThis!Share to TwitterShare to FacebookShare to Pinterest
Labels: Tools

My three color method test levy is finally finished and based so I could take some head-to-head shots with my Army Painter dipped levy. I chose to use the two that had the same color tunic. Hard to believe they are the same color. That dip really muddies things up! 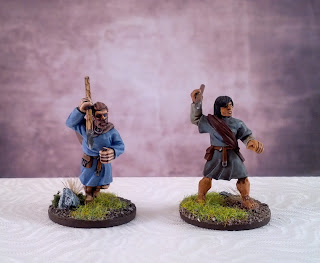 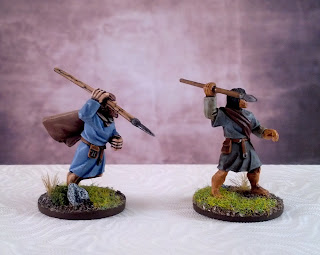 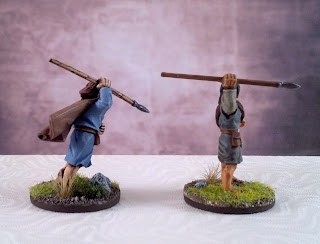 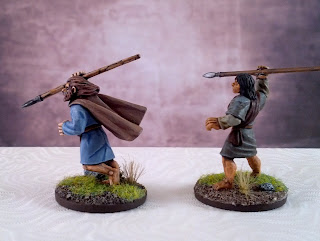 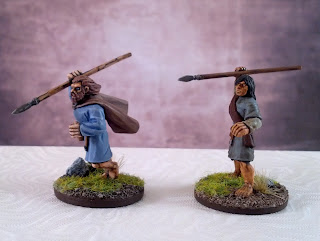 If you ask me there is no comparison. Well, perhaps the three color method spear looks too much like zebrawood. But other than that the difference is night and day. I guess the question now is, do I have the patience to paint the other forty guys this way...
Posted by wiatrog at 7:39 PM 11 comments:

For those among you who have been wondering (sometimes aloud) when I'm going to stop faffing about and get on with it. I give you this: 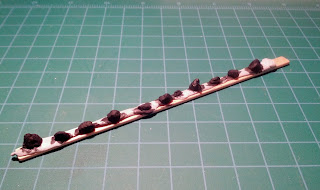 The humble beginning of an assembly line process. I started to paint a single rock with a three or four color dry brush. Then I stopped and thought, "Why not do several?"  =]
Posted by wiatrog at 5:35 PM 1 comment:

Finally back at it!

It's been a while since I posted anything. We had a week vacation out in California and on our return we all got sick. One of the hazards of air travel, I suppose. I started a new job last week as well, so things have been a bit hectic around here.

I glued my test levy's spear on and painted it before I left. I think I might have left too much of the black basecoat exposed. Next time I will try to make that more subtle. 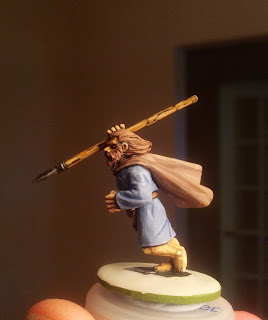 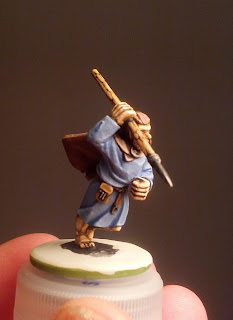 Upon return, I hit the spear with gloss coat and then when it dried, sprayed it with Dullcote. It may have bit a tad bit too humid though. His mustache seems to have a strange white, shiny bit on it (see below). I feel like it's in the matte finish as I can only see it from certain angles. I think Florida is just too humid for sprays and I've ordered some brush on acrylic matte. 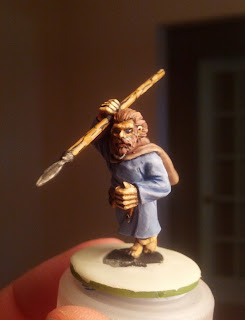 I tried re-glossing and re-matting that part of his mustache but the white spot still seems to be there. I may left it as is or try to black it out with a very fine felt tip. Next up, basing! 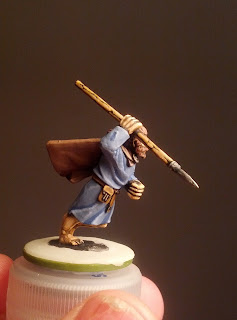 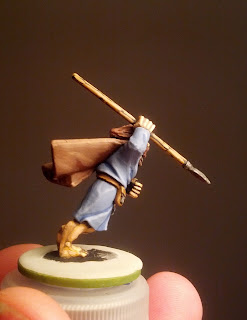 Long time no post. We were on vacation in northern California. My wife was in a wedding in Aptos, CA (near Santa Cruz) so we decided to spend the week in the mountains. We took a ride through the redwoods on this awesome narrow gauge Shay! 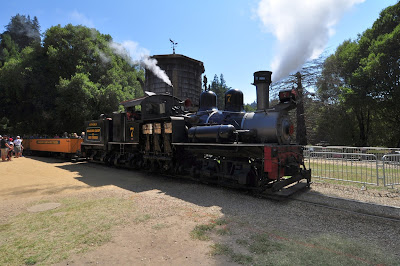 Posted by wiatrog at 4:43 PM No comments: